Back to Next Generation

From DOMA to dental care

GRAPH OF THE DAY

THREE SAFETY NET PROGRAMS AND THE UNEMPLOYMENT RATE 20078-2012.  TANF data from Office of Family Assistance, SNAP data from United States Department of Agriculture, unemployment (continuing claims) and unemployment rate from Department of Labor/Bureau of Labor Statistics.  Published in the NYT. 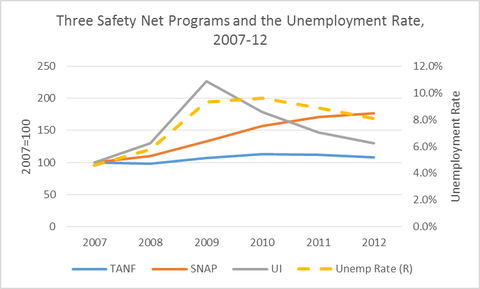 INFOGRAPHIC OF THE DAY

VIDEO OF THE DAY

In a 5-4 decision, the Supreme Court struck down DOMA, the Defense of Marriage Act. The impact of the decision is eloquently summed up by President Obama: "The laws of our land are catching up to the fundamental truth that millions of Americans hold in our hearts: When all Americans are treated as equal, no matter who they are or whom they love, we are all more free."  READ»

Annie E. Casey released its 2013 Kids Count Data Book on Monday.  The timing of the release diminished the media attention this important, annual report on America’s children richly deserves.  The report —which tracks 16 key indicators of American kids’ well-being—has been a vital resource for child advocates for 24 years.  At a time when child poverty is on the rise and an appeal for a national investment in early childhood is under way, it’s a report that should be carefully reviewed and analyzed.  READ»

39th in education, 29th in health, 42nd in family and community support and 46th in economic well being, these rankings from the Casey Report, comparing California’s kids to their peers living in the other 49 states and the District of Columbia, reveal that the future prosperity of the Golden State’s children requires greater attention from the elected officials in Sacramento.   READ»

The issue of universal preschool is being promoted by many of California’s public policy organizations.  Arne Duncan discusses his most “ambitious” challenge, high-quality preschool, in a conversation with PPIC’s Mark Baldassare.  An essay published by the New American Foundation explores how the collaboration between the states and federal government envisioned in the President’s initiative could benefit Head Start.  CAP dispels any residual misconceptions about the preschool initiative in a report: “The Top 10 Myths About Preschool,” a report that punctures many of the same incorrect assertions Next Generation’s Rey Fuentes identified in a series of blogs he wrote earlier this year.  READ»

National standards set by dental and pediatric organizations call for children to visit a dentist every 6 months; but almost 60% of California’s children on Medi-Cal did not receive any dental care in 2011.  Although pediatric dental care is one of the ACA’s “essential health benefits,” parents are not required to purchase insurance to cover it.  Covered California will offer stand-alone, optional pediatric dental coverage from five insurance providers.  But health care experts fear lack of access to preventive care in California will seriously impact kids’ dental health and cause small financial outlays for minor treatments to balloon into costly procedures.  READ»

Less than 100 days remain before enrollment in the ACA’s healthcare exchanges begins on October 1.  The Washington Post’s Sarah Kliff presents a list of the 99 things that must occur to ensure a smooth rollout across the country.  Not to be outdone, The Hill identifies 10 key players who will help or hinder the new law’s implementation.  The enrollment of Latinos is indispensible to Obamacare’s success because they comprise 17% of the U.S. population and 32% of America’s uninsured.  For those still unconvinced of the ACA’s imminent arrival, check out Obamacare’s new website.  SEE»

Jared Bernstein evaluates important components of America’s social safety net—appraising how TANF and SNAP both performed during the Great Recession.  Specifically on the issue of child poverty, he explains how the elasticity woven into the SNAP program helped cap the growing number of children who were living without enough food to eat.  Then, contrasting SNAP’s effectiveness with the unresponsiveness of TANF, a block grant the federal government funds and distributes to the states, he shows how transforming food stamps into a TANF-like block grant would produce higher levels of child poverty.   READ»

QUOTES OF THE DAY

[DOMA] “demeans the couple, whose moral and sexual choice the Constitution protects and whose relationships the State has sought to dignify.  And, it humiliates tens of thousands of children now being raised by same sex couples.” Writing for the majority in United States v. Windsor, Justice Anthony Kennedy explains why the Defense of Marriage Act is unconstitutional.

“DOMA is unconstitutional as a deprivation of the liberty of the person protected by the Fifth Amendment of the Constitution.” Writing for the majority in United States v. Windsor, Justice Anthony Kennedy cites the legal basis for why the Defense of Marriage Act is unconstitutional.

"It's a misprioritization problem.”  Children Now President Ted Lempert summarizing why California ranks 2nd nationally in spending on corrections and prisons but 39th in per capita spending on education. Quoted in The Reporter.

“For many of today’s conservatives, the increased use of a safety-net program is proof that there’s something wrong with the user, not the underlying economy.”  Jared Bernstein quoted in the New York Times.

“There is something profoundly wrong when a legislative majority is so eager to risk leaving so many Americans hungry.”  E.J. Dionne in the Washington Post expressing his opinion that the defeat of the Farm Bill in the U.S. House was a moral act.

“It’s a battle.”  Secretary of Education Arne Duncan commenting on the difficulty in trying to get the U.S. Congress to move forward on President Obama’s goal to double access to high-quality preschool and finance the $75 Billion program with a cigarette tax, quoted in Ed Source.

What Obama's Pre-K Proposal Could Mean for Head Start.

The Top 6 Myths About Early Education.

The Top 10 Myths About Preschool.

Obamacare starts in 99 days. These 99 things need to happen before then.

10 to watch on ObamaCare rollout.

Low-income California Children Among Least Likely to Get Dental Care.

DEFEAT OF THE FARM BILL

Lessons of the Great Recession: How the Safety Net Performed.

Trouble for the ACA, SNAP, and single parent families

Could 'social impact bonds' restore the Land of Hope and Dreams?

With the budget deal, California's Poor Children Given Critical Boost in School Funding — But Still Need More Investments in the Early Years